Winter begins in the Talkeetna Mountains earlier than in Oregon. On a trip to Alaska, we visited our old stomping grounds, our destination Independence Mine State Historical Park. We parked by Hatcher Pass Lodge and walked around the gate that blocks winter traffic, choosing a gravelly trail rather than the paved road. We hiked uphill toward the old mine buildings and away from the nearly empty parking lot. Looking back, sometimes we could see the parked cars and sometimes small variations in terrain blocked that view.

View of the Matanuska Valley and Chugach Range from Sixteen Mile on Hatcher Pass Road. Sept. 25, 2013.

Driving to Independence, we had stopped at the Sixteen Mile overlook where there is a grand view of the Little Susitna River framed by deeply grooved slopes and the notch where the Little Su squeezes between cliffs then flows into the Matanuska Valley. From Sixteen Mile, the Matanuska Valley is a triangle of autumn-gold birch forests with a backdrop of the already snow-covered Chugach Range—Pioneer Peak, Three Sisters, and Mount POW/MIA. A few weeks ago the lower slopes would have been a luxuriant green but now the leaves have dropped from the alders (the bushy variety, not the tall trees) so the effect is of a gray stubble, stippled with clumps of cottonwoods and aspens, the trees still with yellow leaves mocking the first snow. 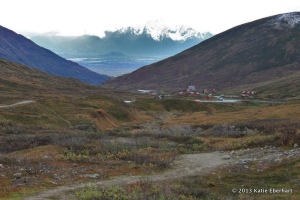 From the trail to Independence Mine: Hatcher Pass Lodge and in the distance the Matanuska Valley and Pioneer Peak. Sept. 25, 2013.

Hiking uphill beneath gloomy skies was more meditative than strenuous. The mountain peaks bore the first mottled snowfall and no one else had chosen this trail. We saw only a couple other people, from a distance, and later talked briefly with a park ranger.

We had walked into a suspension of time, the few days or weeks between the tromping of summer visitors and the slick sliding of cross-country skiers and snow boarders. We breathed the musty scents that precede winter, of rotting leaves and a cessation of growth. A marmot whistled. Eventually, we noticed an Arctic ground—”parky”—squirrel squatting on a boulder but while we watched, he chattered then scurried into a hole. A few hail stones bounced on the ground and I zipped up my jacket. From time to time, I turned to look back at the view of the Valley but mostly noticed the cold upwelling wind.

A fine hike occurs when you discover a new trail, especially in a landscape with a terrain where you see then lose views in seams between hills and, as you walk, you realize that everything is more convoluted than you thought. 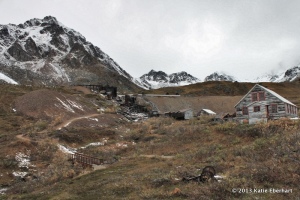 Trail with a bridge. Independence Mine State Historical Park. Sept. 25, 2013.

We had noticed a bridge, new to us since we had not visited the park for a few years. Beyond the bridge, an unfamiliar trail angled enticingly upward past ruins from when Independence was a hard-rock gold mining enclave and many miles of tunnels were drilled through the mountains. Shacks still hang high on the precarious slopes, marking points where miners once had entered the tunnels.

Crossing the bridge, new and solid with high railings, I stepped down onto the trail where a small motion stopped me short. For a moment, I scanned the stones and sandy soil, finally spotting, among the bare alder branches and clumps of melting snow, a small flock of mottled birds with white feathered legs and brown-and-tan wings and heads. The birds eased away from me, their plumage a perfect camouflage against the dappled ground—these ptarmigan, almost as tame as chickens, in the heart of the historic mining park where hunting is not allowed.

Slowly, we traipsed after the ptarmigan, reluctant to spook them into flight. After a few minutes of slow progress, a larger ptarmigan hopped onto a rock, stared at us and then clucked a scolding to the flock. The assembly took off, wings flapping hard as if flight was a great effort taken deliberately and only after careful consideration. 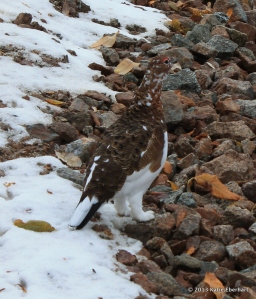 I’ve seen ptarmigan in winter, perched in alders after a snowfall so that the white plumage looked like snow piled on branches and I stared at the shrubs for some time before deciding which fluffs were birds.

The ptarmigan launched upward then plummeted into the brushy swale where their camouflage functioned and we couldn’t find exactly where they had landed.

Galvanized railing at odds with ruins. Independence Mine. Sept. 25, 2013.

We trod carefully, the trail a changeable path of barely tracked snow and icy patches, but still not too slick for our light hiking shoes. Above the mine, if there had not been another bridge, we would have had to decide between returning the way we had come or hiking farther uphill in search of an easier stream crossing. Or we might have decided to walk through the stream, stepping between rocks, or wading, but the water would have been glacially cold. 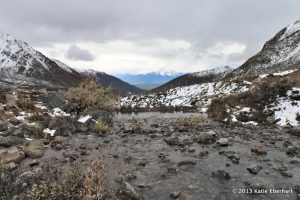 Photo from bridge above the mine ruins.
Without a bridge would we have crossed on the rocks?

But we walked over the stream on the bridge—an easy decision.

On our way back to where we had parked, we again chose the rocky trail rather than the paved summer access road. The downhill walking was undemanding but the chilly breeze made us glad for hats and gloves even though the autumn gusts lacked the ferocity of winter blasts that roar down from the frozen peaks.

In January, I have come to Independence Bowl to ski on blue-sky afternoons when snow flags from the high ridges—Microdot, Ray Wallace Chutes, and The Pinnacle. Emerging from the warm car into the subzero (Fahrenheit) chill I realized that I had forgotten a face mask or scarf. The frigid wind caused me to retreat, driving back to the valley but promising myself I would be better prepared the next time.

In late September, at the edge of winter, the breeze didn’t cause us to abandon our outing and a meditative solitude was the enduring theme.

Historic mine buildings. Matanuska Valley in the distance. Sept. 25, 2013.

Links to my Solsticelight.com Alaska Pages:

5 thoughts on “Alaskan autumn — at the edge of winter”