The online journal Elohi Gadugi accepted four of my poems for the Spring 2013 theme issue “Root & Branch.” Each poem has a backstory, something that sticks with me so I begin writing. Two of the poems arose from my experience traveling with Students On Ice:* 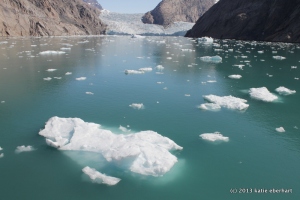 Greenland fjord with the Students On Ice Arctic Expedition. July 31, 2011.

Deconstructing Forests begins with a view from the bus window crossing Iceland.

Where Is The Nobility In Accidental Death? begins with a glacial fjord in Greenland that is close enough to touch.

Before moving to Oregon I lived in Alaska for years, decades, actually. Plenty of time to observe seasonal changes and ask: Is Nature Enough?

Sometimes poems come from a good story. Sometimes a good story arises after a bad storm, or a mega-storm that came suddenly and without warning: The Storm—Aftermath is based on a story my mom told me.

*Students On Ice, is a Canadian organization focused on education of high school students about the Arctic environment, science, culture, and climate change. In late July 2011, we departed from Toronto on a night flight to Reykjavik—over forty scientists, artists, Inuit educators, adventurers, gun-bearers, researchers, writers and poets, and seventy-five very enthusiastic students from seventeen countries. Nearly three weeks later, we had crossed Iceland (by bus) and voyaged by ship to Greenland, Labrador, and Nunavik.