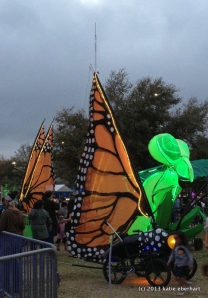 Not “Riverwalk” but “Luminaria” is how I’ll remember a recent weekend in San Antonio.

At Alamo Street, gigantic butterflies, their wings glowing, zipped past us then circled and returned to a butterfly congregation. It was dusk and the Luminaria was gearing up for a night of illuminated performance and art. Already, people were crowding streets that had been closed for the festival.

Illumination: “to brighten with light,” “to decorate or hang with lights” but also “to enlighten,” “clarify,” and “to glow.” 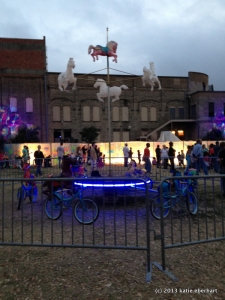 Merry-go-round with bicycles and horse

Inside San Antonio’s Hemisfair Park, one of the Luminaria sites, we stopped beside a merry-go-round or something resembling a merry-go-round—circular and with horses, except the horses were fastened to bicycles and four smaller horses floated above, attached to a pole. The blue neon light and absence of people or operators inside the fence gave this carousel a grimness that might appeal to poets writing within the palette of night-ness.

When we go out in the evening, we turn on one porch light, but not fifty, or a hundred. It would not occur to us to put all our lamps on the porch and plug them in, but in the Hemisfair Park we found a house with the porch illuminated by a large quantity of lamps. The strangeness of excessive appliances reminded me of Nam June Paik’s exhibit at the Smithsonian Museum of American Art in Washington, DC. One of Paik’s installations had many televisions placed on the floor but angled upwards like foot-lights. The TVs were half-hidden among potted plants and all the televisions looped the same (circa 1970s) low-definition video of musicians playing a real cello and a fake cello constructed out of televisions.

Now, looking at the photo of the house with the illuminated porch, I see details of arching trees and that the upper floor remains deeply shadowed. Other people are observing the display and I wonder whether they noticed the blackened windows and the door that vanished in overexposed whiteness?

We walked on, passing a line of people at the Women’s Building and later learned we had missed a 3-D installation that included fake clouds inside the stairwells. Instead, we returned to Alamo Street where the crowd had grown and, with darkness, the buildings glowed, hard-shell sides covered with mutating skins—stripes, circles. Paisley. Two vehicles—an armored beetle and a fancy-jeweled jeep—had been unloaded from a trailer, but nothing was happening.

Alamo Street from beneath the Hemisfair arch

Descending stairs by the Alamo Street bridge, we found a table in an Irish Pub beside the Riverwalk with a view of the tourist barges motoring along the channel followed by a Luminaria barge with large television screens looping scratchy black-and-white movies of early settlers—a showing that Nam June Paik would certainly have approved of.

When Chuck and I returned to the increasingly frenetic street level, we found flames above the armored-beetle car and, to get a closer look, I squeezed to the barrier-fence just as a fiery plume erupted with a roar above the jeep. The crowd gasped and collectively stepped back as the hot air blasted past.

Luminaria as performance and street-art has roots in White Nights, or nuit blanche, a night of light where no one sleeps, and an idea that originated in St Petersburg, Russia (Wikipedia), or Helsinki, Finland as a summer festival. In 2002, in Paris the nuit blanche became a festival of illumination and art (Wikipedia: nuit blanche).

Luminaria is not art in the isolated neutrality of a gallery or museum. Behind the flame-belching jeep, colored circles floated upwards on the wall of a high-rise hotel while around the corner of the building balcony lights had been switched on or off to write S-O-T twelve-stories high.

After encountering Ai Weiwei’s sculpture “Fragments” at the Freer Sackler Gallery in Washington, DC, I had started reading Weiwei’s blogs and was intrigued by his explanation of built and lived-in environments, especially the role of light in architectural space:

“Light defines objects and gives spaces their unique characteristics. The strength of weakness, direction, and changing nature of light and shadows alternately invite and repel peoples’ emotions. Emotions are the primitive foundation of aesthetic sense.”

“The volume of light, proportions, structure, and materials determine how we experience space. Space can also be psychological, it is capable of arousing the imagination.”
– Ai Weiwei

Weiwei speaks of light but darkness also has a profound effect on emotions and imagination. Mixing darkness and unusual illumination skews notions of normalcy like the strange carousel that we had seen with horses on bicycles. 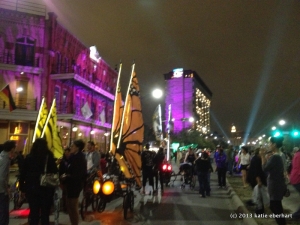 By 9:00 pm, the crowd was changing as families with children departed. We were walking south along Alamo Street and debating whether to leave or stay when we encountered a throng of people blocking half the street; the other half was barricaded with a strand of red tape. Chanting came from the throng and I stood on my toes peering through the crowd, catching a glimpse of men standing bare-chested with their arms crossed and later we found a higher vantage on the other side of the circle where we saw that breakdancing was the attraction. But, in the margin between the tape and the crowd, just turning around, we had a clear view of a woman standing on the roof of a car. She was reading, or rather shouting, what was written on a cloth that draped over her arms and the car, but the chanting hid her words.

Inside the same circle of tape, a man stood on top of another car and also read loudly from a strip of fabric while bicyclists careened around both cars and the building across the street garishly changed colors.

I have been working on this blog post for longer than I care to admit and now I’m faced with writing an ending but everything I’ve come up with has been too trite to keep. Luminaria was a giant street fair and art walk where illumination was required and the event took place at night, but describing avoids tackling the question of meaning. I return to Ai Weiwei’s writing and the idea of how light effects emotions and the imagination. At Luminaria, illumination was required of the performances and art, but I think the artistic intent varied between entertainment and a message. The wildcard factor was the effect of layering where chanting overlaid reading, or flaming eruptions were backed by whimsical bubbles and the letters SOT.

Was Luminaria just a really good party or a very serious endeavor? Or both? Maybe I’ll go read something by David Foster Wallace and think about this some more.

1) In the 1990s there were more white night art festivals (Wikipedia) in cities such as Paris, Barcelona, Naples, and Havana. In Toronto, the White Night festival was described as:

“For one sleepless night, experience Toronto transformed by hundreds of artists. One night only. All night long.” – http://www.scotiabanknuitblanche.ca

2) The Society of Toxicology (SOT) was meeting that weekend in San Antonio.

6 thoughts on “Luminaria: Night of Magic and Imagination”