art, at the same moment, Manhattan 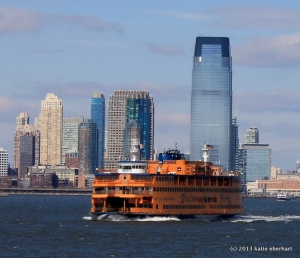 Standing out on the deck of the Staten Island Ferry, the blue sky implied a nice day but the temperature was around freezing and the wind made it even colder. We were returning to Whitehall on Lower Manhattan, the same terminal we had departed from less than an hour before.

We had just missed the previous ferry and so had waited inside the high-ceilinged glass-and-steel building. When the ferry-loading doors opened, we were at the front of the crowd that walked swiftly, following walkways and turning corners as if of one mind, finally descending a ramp onto the ferry.

Inside, the ferry had rows of long wooden benches where we sat for a few minutes then went out on deck, into the chilling wind, to get a better view of the Statue of Liberty. The ferry didn’t stop but the magnificence and symbolism of the gift from France to the U.S. was evident. I held my camera up to take a picture of the famous statue and instead got a photo of what looked like a gray balloon but was actually the back of a jacket hood when someone squeezed to the railing at the same moment I clicked the shutter.

We had taken the free Staten Island ferry to see the Statue of Liberty and get a view of the New York skyline and we had only gotten off the ferry at Staten Island because the crew insisted that “everyone must leave the ferry.” Inside the Staten Island terminal we hurried along with people who intended, like us, to re-board the same ferry for the return trip.

As we returned to Manhattan, I stood, wind pummeled, on the front deck, experiencing the changing perspective that comes with approaching a geographic feature across a flat plain or body of water. It was mesmerizing to see the human-built landscape of tall buildings that is also an expression of culture and architectural fashion, history, ideas, and imagination. As we came closer, the tall buildings appeared as a blocky terrain of layers and vertical-walled canyons, but this perspective changed as the narrowing distance brought the details of the scene to the forefront: glass walls that seemed more sky than surface, windows set uniformly in grids of stone or concrete, the verdigris of copper roofs. This aspect also didn’t last. As the ferry maneuvered to the dock, it was the close-up view of the words “AT THE SAME MOMENT” that caught my attention.

An artist can never be certain of the effect of his or her art upon those who encounter it. The words at the same moment painted across a black and a white rectangle seemed innocuous and yet the effect was that of an open-ended question, or a whole raft of open-ended questions, and left me pondering my own perception. A few nights before we had seen a magic show where the magician asked for a volunteer to provide a bill with his name written on it. The magician wrapped the twenty dollar bill in a piece of paper which she lit so money and paper vanished in a burst of flame—or that’s what I saw—yet, a few minutes later, the magician asked the volunteer to tug the same bill out of a dinner roll.

AT THE SAME MOMENT – Lawrence Weiner

Contemplating just four words (“at the same moment”) is a convoluted exercise not unlike the display we’d seen the day before at the Museum Of Modern Art where an area of floor was covered with an “amorphous mass of thread waste, remnants from textile manufacturing.” The artist was Robert Morris and the installation was called Untitled, 1968. Viewed from the stairway above, Morris’ work looked like a puffy gray rug but closer inspection revealed the dimensionality of crimped and twisted yarn scattered with other items like copper pipe and mirrors. The mirrors were propped upright and, disturbingly, appeared to be windows through which you could see more of the same. The drab entanglement, interspersed with yellow, blue, and red fibers, suggested an unraveling—leaving to the imagination what garments might have been constructed, or deconstructed—but also made me think of the bizarre rafts of post-industrial trash that float in the Pacific Ocean.

With some clanking, the ramps were lowered to the ferry deck and we walked off the vessel with all the other passengers, traversing a wide hallway and emerging into Lower Manhattan, everyone, almost at the same moment.

4 thoughts on “At The Same Moment – Staten Island Ferry”