Last week, we spent two days and three nights at the Bald Butte Lookout in the Fremont-Winema National Forest of Oregon. I made the reservations on the recreation.gov web site, duly noting that the last few miles to the lookout were not suitable for regular cars.

My main motivation was to see, and photograph, the stars. I was hoping for clear skies without smoke. Mostly, that’s what we got, although one morning smoke had drifted into the valleys like a thick fog.

When was the last time you looked up at a really star-filled night sky? In “A Sense Of Wonder,” an essay written over half a century ago, Rachel Carson observed: “. . . A few lights burned in cottages. Otherwise there was no reminder of other human life; my companion and I were alone with the stars. I have never seen them more beautiful: the misty river of the Milky Way flowing across the sky, the patterns of the constellations standing out bright and clear, a blazing planet low on the horizon. Once or twice a meteor burned its way into the earth’s atmosphere.”

Bald Butte Lookout is no longer a fire lookout, having been converted into a vacation rental. The lookout is white clapboard with wrap-around windows and shutters propped out like wings. From the lookout, if the air is clear, you get a panoramic view of mountains and ridges as far as the the Steens Mountains to the east, Mount Shasta in California, and Mount Thielson near Crater Lake in the Cascades. On Bald Butte, there are no trees and a nearly perpetual wind. 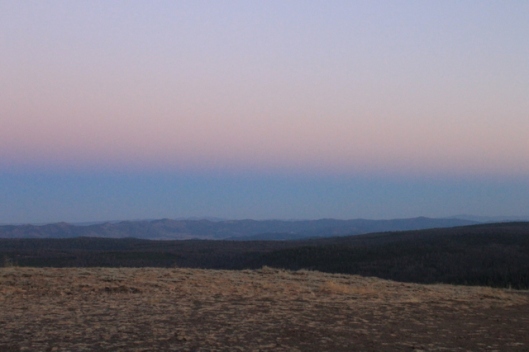 Darkness Travels From The East

As The Sun Vanishes In The West 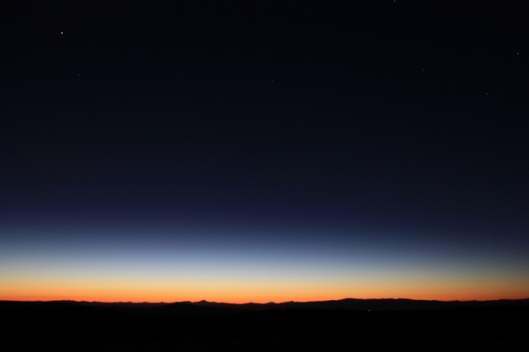 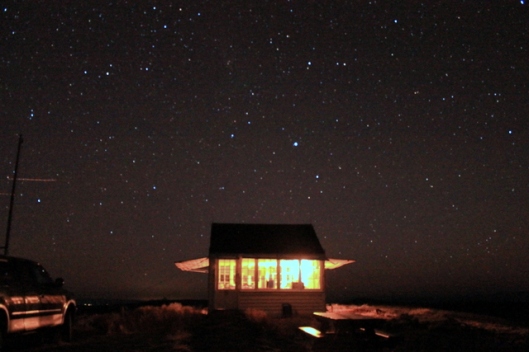 Defining Our Space With Light 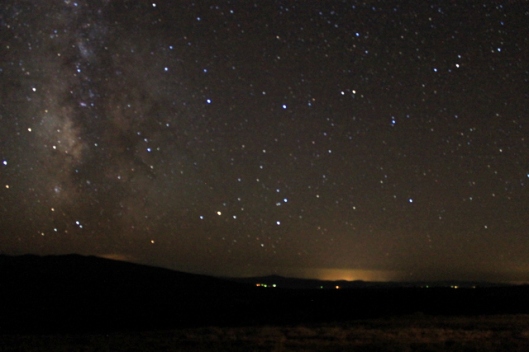 Fantastically, What The Camera “Sees” — The Milky Way More Three-Dimensional (Like Billowing Smoke) Than Flat

While We Are Well-Anchored With Guy Wires, Lightning Rods And Woven Grounding Cables 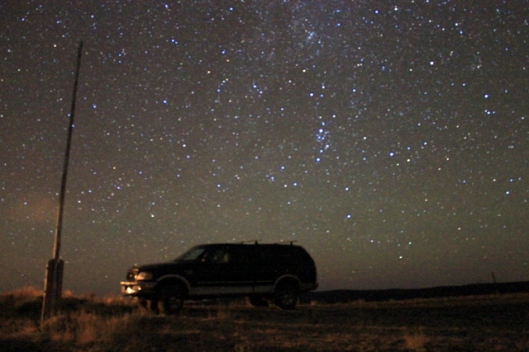 As, On A Moonless Night, Starlight Accumulates 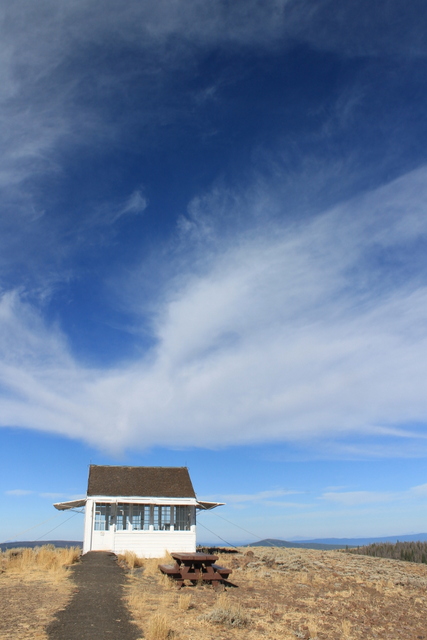 . . . and you carry with you the memory of stepping outdoors sandwiched between earth and stars. Something worth remembering, and contemplating. 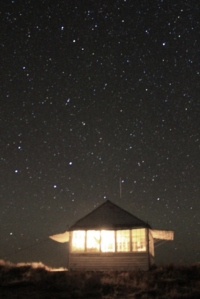 When Rachel Carson wrote “A Sense Of Wonder,” she described a place “. . . out on a flat headland that is almost a tiny island, being all but surrounded by the waters of the bay. There the horizons are remote and distant rims on the edge of space. We lay and looked up at the sky and the millions of stars that blazed in darkness . . .”

Carson considered the dark-night-sky as not unique, but she asked what if  “…this were a sight that could be seen only once in a century or even once in a human generation; [then] this little headland would be thronged with spectators. But it can be seen many scores of nights in any year, and so the lights burned in cottages and the inhabitants probably gave not a thought to the beauty overhead; and because they could see it almost any night perhaps they will never see it.”

Now, though, most of us must travel to the headland or mountain top, away from city lights and haze, to experience and appreciate what countless generations have taken for granted: dark starry nights.

*Night Sky Photo Notes: The camera I used was a Canon EOS Rebel T3 on a tripod, utilizing the 2-second timer setting, ISO 1600 or 3200, F-Stop 3.5-4.5, and shutter between 20 and 30 seconds. I practiced at home on the town sky framed by trees and house roofs to get an idea of what might work, but still had to make adjustments on Bald Butte because the night was so much darker than where I live. Also, my first attempts at including the glass-walled cabin in the photos were unsatisfactory because the lookout, even with only two dim lights inside, became an overexposed blob. Turning off one of the lights and waving a piece of cardboard across the lower part of the lens to block the cabin light for about three-quarters of the exposure time–rather like “dodging” when printing from film–yielded the best results.

Source: Rachel Carson. A Sense Of Wonder. Library E-Book. According to Wikipedia (http://en.wikipedia.org/wiki/Rachel_Carson#cite_note-Murphy_25-68) this essay was originally published in 1956 in Woman’s Home Companion.

6 thoughts on “Finding The Starry Night”